Is the Word of God created?

The Qur’an affirms that the words of God are infinite: “Say, If the sea were ink for [writing] the words of my Lord, the sea would be exhausted before the words of my Lord were exhausted, even if We brought the like of it as a supplement” (Al-Kahf 18:109). In addition, the Qu’ran رsays, “And if whatever trees upon the earth were pens and the sea [was ink], replenished thereafter by seven [more] seas, the words of Allah would not be exhausted. Indeed, Allah is Exalted in Might and Wise” (Luqman 31:27). His words are infinite. If the sea that God created were ink for writing, and the trees were pens, the ink of the sea and the forests of pens would perish, but the words of God would not perish.

“It was narrated that Khawla Bent Hakim said, ‘I heard the Messenger of Allah (peace and blessings of Allah be upon him) say: He who entered a house and said: I seek refuge in the perfect words of Allah from the evil of what He has created. Nothing will harm him until he leaves that house’” (Reported by Muslim, 2708).

“It was narrated that Abu Hurayrah (may Allah be pleased with him) said that ‘the Prophet (peace and blessings of Allah be upon him) said: The virtue of the Word of God over all other words is like the grace of God over all of his creation.’” Narrated by Ahmad (3/390), Abu Dawood (4734) and Tirmidhi (2925).

This hadith includes proof from two aspects that the Word of God is not created:

The second is to differentiate between the Word of God and the words of others, such as the difference between God and people.

It is reasonable to say that the Word of God, if it is created, has one of two attributes: First, to be a creature that exists in God. Second, to be separated from God. And both cases are invalid.

The first requires the creature to be part of the Creator, which is invalid. God can exist without His creation. In the second, it is necessary to disconnect the attribute of speech from the Almighty, as the attribute exists with God and not without Him, which means that God has no ability to speak. This is also clearly invalid.

When God imparted words describing Himself, His Word was uncreated; for His Words are attributes of Himself, and He is not created.

Here, we need to speak about Isa Al-Masih (His peace be upon us), the Word of God, “[And mention] when the angels said, ‘O Mary, indeed Allah gives you good tidings of a Word from Him, whose name will be the Messiah, Isa, the son of Mary—distinguished in this world and the Hereafter and among those brought near [to Allah]’” (Al-Imran 3: 45-46). “Isa Al-Masih the Son of Mary is the Messenger of God, and His Word is delivered to Mary and a Spirit from Him” (Women 4: 171). In these passages, is God’s Word created or eternal? 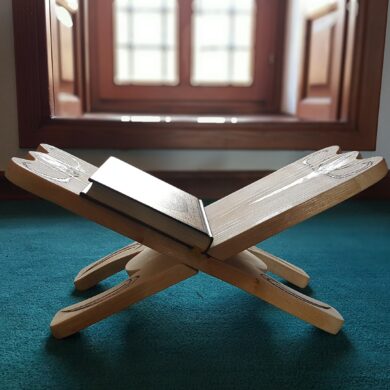 Does the Qur’an says that the Bible is corrupted?
فارسی
English العربية Español Português do Brasil Français فارسی