My name is Ahmad, and I am a Shiite from Iraq. I left my country because of the war and embargo during Saddam Hussein’s regime. I could not go back because I would be killed by the regime. I lost all of my family members to war. My brothers were killed in the Iraq-Iran war, and my parents during the second Iraq war in 2003. I have lived in Jordan for the past 25 years.

One day I was walking down the street, and in my heart I was struggling. Why had all this happened to me? Why did I have to suffer and lose my family? Why were my immigration papers delayed? I was muttering to myself. As I was walking past a church, something stopped me and urged me to go inside. I had never been in that church before, and I was uncomfortable. Would they throw me out? But I could not resist that urging, so I walked into the church that afternoon.

There were no statues or pictures in the church, just people sitting and listening to a preacher. He was preaching in English, and my English is not good, so I sat quietly and tried to understand. The preacher seemed to see that I was not understanding, so he started saying the main points in Arabic. I really liked what he said. After prayer, to my surprise, he came directly to me and welcomed me. He was so friendly. He then invited me to eat lunch with him and his family. He insisted that I go with him, so I did. That opened the door for a long-lasting friendship.

I started asking the pastor questions. He was so understanding and answered my questions with love. I challenged him, but he was so calm and sure of what he believed. We started studying the Qur’an and the Bible. He had knowledge of both of them. We discussed everything—whether the Bible was corrupted, who Isa is, the Trinity, Isa’s death on the cross, family issues, the inspiration of the Qur’an and the Bible, the validity of the Hadith, and so on. I started seeing things in a different way. After four years of friendship and studies with the pastor, I accepted that the Bible is the Word of God and not corrupted. I saw Jesus differently even as the Qur’an says, “among those brought near [to Allah]” (Al-Imran 3:45), but I could not accept that He is God in flesh.

I remember one night after a long discussion about who Jesus is, my friend prayed for me and asked God to show me the full truth of who He is. Then he told me that God will always reveal His truth to those who are seeking.

Early the next morning, I had a dream. In it, a Man in White was talking to me and asking me, “Why do you doubt who I am?”

He answered me, “I Am the Way, the Truth and the Life. Listen to your friend. He is telling you the truth.”

I woke up at 5 a.m. with an overwhelming urge to call my pastor friend. “I believe!” I blurted out when he answered the phone.

“What do you believe?” he asked, sleepy and confused.

“I am telling you, I believe!” I nearly shouted. He could not understand what I meant. I repeated the same answer four times before I realized I hadn’t told him about my dream. “I saw Jesus in my dream!” I finally said. “I believe He is my God and Savior!” My friend was so happy for me, then he prayed with me on the phone, thanking Jesus for leading me to the full truth and encouraging me to submit my life fully to Jesus. During that prayer together, for the first time I prayed in the name of Jesus.

I do not know what would have happened if I had not listened to the voice of the Holy Spirit that day and entered that church, or if I had declined the pastor’s invitation to eat with his family. Now I can see how God led me through those four years of study to learn so much, and then to seal the truth in my heart with the dream. My life is not easy at all, but I can shout with the Apostle Paul, “For this reason I also suffer these things; nevertheless I am not ashamed, for I know whom I have believed and am persuaded that He is able to keep what I have committed to Him until that Day” (2 Tim. 1:12). 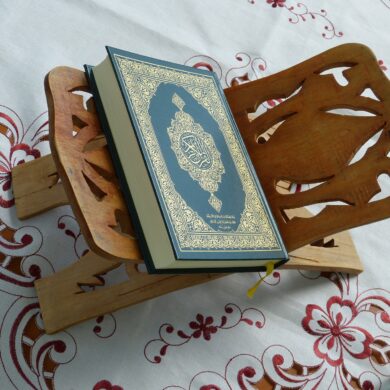