Whose Son is Isa Al-Masih?

There have been many arguments about Isa Al-Masih, who He is? The Qur’an repeats that people are in doubt about the person of Isa Al-Masih, for example:

Both the Holy Bible and the Qur’an describe that God breathed into Mary (Al-Anbiya 21:91) or into her womb (Al-Tahrim 66:12) of his Spirit (God’s Spirit), and Mary then became pregnant and gave birth to Isa Al-Masih. Do you see any mention of sexual relations in these passages?  No, God forbid! God breathed into her!
When the Holy Bible uses the term “Son of God,” it does not mean that God has married or that He has had sexual relations. Nor does it deny the oneness of God.  On the contrary, we can know that the birth of Isa Al-Masih son of Mary was by a breath of God’s Spirit.

What makes a son a son to a Father?
1- Carries the blood of the father. Isa has no earthly biological father, from where did He get His blood? That’s why we call Him “Son of God”.

2- Carries the name of the father, Isa Al-Masih has no earthy biological father, so He carries God’s Name. That’s why we call Him “Son of God”. 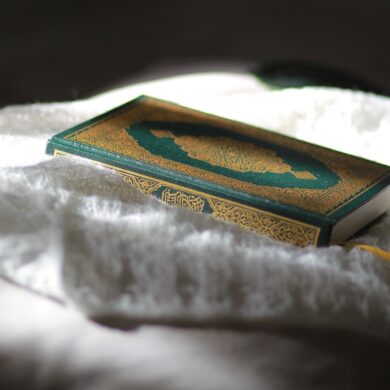