The True Faith According to the Qur’an

“Say, ‘O people, I am the Messenger of God to you all—He to whom belongs the kingdom of the heavens and the earth. There is no god but He. He gives life and causes death.’ So believe in God and His Messenger, the Illiterate Prophet, who believes in God and His words. And follow him, that you may be guided” (Al-A’raf 7: 158).

The Qur’an clearly states in this verse what true faith is:

The question that arises is what are the words of God or the Word of God that the Illiterate Prophet believes in? Here I would like to share some of what the commentators of the Qur’an said about this verse.

“His words are the words of God Almighty written by the Torah, the Bible and the Qur’an” (Tafseer al-Qurtubi).

“Mujahid and al-Sadi said: It means, Isa son of Mary and it reads ‘His Word’.” (Tafseer al-Baghawi).

Indeed, the Qur’an clearly explains this faith in Surat Al-Tawba: “They have taken their rabbis and their priests as lords instead of God, as well as the Messiah son of Mary. Although they were commanded to worship none but The One God. There is no god except He. Glory be to Him; High above what they associate with Him” (Al-Tawba 9:31). Note here that the true faith is to worship God and Christ (the One and True God).

“The Angels said, O Mary, God gives you good news of a Word from Him. His name is the Messiah, Jesus, son of Mary, well-esteemed in this world and the next, and one of the nearest” (Al-Imran 3:45).

“Then the angels called out to him, as he stood praying in the sanctuary: God gives you good news of John; confirming a Word from God, and honorable, and moral, and a prophet; one of the upright” (Al-Imran 3: 39).

In the interpretation of this verse, Al-Tabari says: “He was confirming a word from God. He said: ‘Isa, the son of Mary, is the word of God, his name is Christ …’ Yahya was the first to believe in Jesus and testified that he was a word from God …believing in Isa Ibn (son) Maryam, following His laws and ways… He said: He was the first man to believe in Isa, He is a Word of God and Spirit.”

In his commentary on this verse, Al-Qurtubi said: “He is called a Word because people are guided by Him as they are guided by the words of Allah.”

Al-Tabari said: “Mary, when she bore Jesus, also learned that her sister was pregnant with Yahya. When Mary went to visit her sister, her sister said, “Mary, did you feel that I was pregnant?” Mary said to her, “Did you know that I was pregnant?” She said to her, “I find what is in my womb prostrates to the one in your womb.” How does an unborn child prostrate to another child? Does this mean that the child is not a normal child? How does God allow one of His prophets to prostrate to someone other than God?

“The Word is God revealed … the Word is the essences of the divine, but not another,” said Sheikh Muhi al-Din al-Arabi. (The Bezels of Wisdom Part II, page 35). He also said, “The Word is the Divinity” (p. 13).

The Qur’an repeats what Yahya ben Zakaria (John the Baptist) said when he saw Isa (His peace be upon us), “The next day John saw Jesus coming toward him, and said, ‘Behold! The Lamb of God who takes away the sin of the world!… And I have seen and testified that this is the Son of God’”  (Injil, John 1:29-34).

What is the faith that both the Tawrat and the Injil proclaim about the Word of God, Isa Al-Masih (His peace be upon us)?

“In the beginning was the Word, and the Word was with God, and the Word was God. He was in the beginning with God. All things were made through Him, and without Him nothing was made that was made. In Him was life, and the life was the light of men. And the light shines in the darkness, and the darkness did not comprehend it… And the Word became flesh and dwelt among us, and we beheld His glory, the glory as of the only begotten of the Father, full of grace and truth” (Injil, John 1:1-5, 14).

“And this is eternal life, that they may know You, the only true God, and Jesus Christ whom You have sent… I do not pray for these alone, but also for those who will believe in Me through their word; 21 that they all may be one, as You, Father, are in Me, and I in You; that they also may be one in Us, that the world may believe that You sent Me. And the glory which You gave Me I have given them, that they may be one just as We are one” (Injil, John 17:3, 20-22). 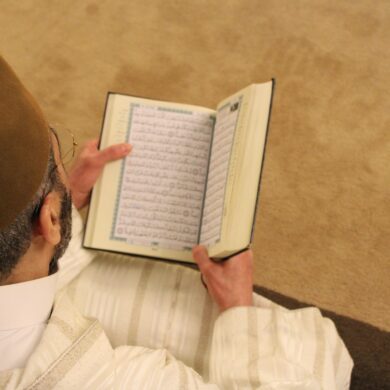