My name is Sahar; I was born and raised in Iran. I come from an educated and religious family, that value and perform the Islamic duties.

One day my father came home from work, sits in the living room and waits for dinner. When my mom called him, she notices that he is motionless. My mom called the neighbors and friends for help, and then he was taken to the hospital. All our resources available were used, but nothing has happened. The doctors could not give any explanation and they did not know how to treat him. Therefore, my father was at home for months.

One day, while my mom was walking outside, she met one of my dad’s friends who didn’t live in that city anymore. That friend had moved to a different country because of being persecuted in that region for being a Christian. My mom told him about dad’s situation, who was already in bed for 50 days without any movement. She also told him how the doctors could not do anything about it and that the only thing he had was his breath.

The man, who had not seen my father for quite some time, asked in a very kind way if he could visit our home and bring a friend who was a doctor. My mom invited him to come and that we would be anxiously expecting him.

On the next day, my father’s friend came to visit; after greeting my mom my brother and myself, he went straight to dad’s room where he lay motionless. Mom found it strange that he came by himself as he promised to bring a friend who is a doctor, but she did not say anything. While in the room he approached my father and powerfully prayed, crying out to the doctor of doctors to touch and restore his friend’s health. The room door had a gap and I was 4 year-old, I stood there watching everything that was happening inside the room.

After the man finished praying, he was saying good-bye to us I was looking at the room and saw my father moving in the bed, I started shouting dad is moving.  As everyone looked at the bed they were astonished and went back inside the room my father was regaining his normal movements. As he woke up, he asked a few questions and a few hours later he was back to his normal life. He did not remember being sick. Everyone in the family was completely astonished. How was that possible? What happened? Who is this God? Where can we find this God?

That man started telling us about God the creator of all things, about (Isa Al-Masih) Jesus Christ, the doctor of doctors, the Lord of Lords and the Savior.

We looked for a Bible in our city but there were no Bibles in our language. Bibles were prohibited in our country. So, my dad’s friend lived in Lebanon and gave us a Bible in Arabic. We did not speak Arabic, then my father started learning Arabic because he was thirsty to learn about the God of the Bible, the God who healed him. He studied and learned Arabic, started studying his own Bible. For we studied the Bible secretly.

As my brother was reading the stories of the creation and the liberation of the people of Israel and the sacrifice of Jesus on the cross, he was amazed with the promises and the peace that were found in the Bible. He wanted to share his new faith, belief and his new understanding of spiritual things his friends. But, we were told not to do so, for it is so dangerous to share our new faith with others, we need to keep it secret.

One day he lost his fear and then decided to talk to his friends, he told them that we studied the Bible and that they had met another God, a God who had created all things, a God of love who cared about their problems, a wonderful God, a merciful God. But, some of the friends told the parents, and a case was presented to the police.

The police came to the house looking for my brother and the Bible, my mother was cooking  at that time, when she saw the police coming, she took the Bible and put it in the oven, so she protected our lives, for if they had found evidence that we were Christians all would have been killed.

My brother at the age of 16 was taken to a place the family does not know where for 3 months he was tortured. He came back home without his teeth and without memory after so many electric shocks he suffered in prison. He came back with traumas and flashbacks just for having revealed to his friends that he knew God the Father and Jesus his Savior. All the persecution and suffering, because he shared his faith with those friends.

We couldn’t find any help in the country, so some people advised us to send him for treatment in Europe, this what happened, and we got news that he died few months later. We believed that despite all the pain and all the suffering, there is a loving Father who is taking care of us.

Our family had to live far away from the rest of the family because now that they were Christians, the family promised to kill them for betraying Islam and they had to leave to about 1300 km.

During my high school time and as a teenager I had many questions, once in school I questioned something about the Qur’an, a part that I didn’t think was right. I was immediately warned by my teacher that the Qur’an should never be questioned. After few months I again questioned something in the Qur’an. The teacher immediately called the police and asks them to take me. They took me to a secret place, where I found myself inside a very dark room without any windows. I remembers with a lot of pain how every day a bad man would come in the room, cursed, insulted and tortured me. One day they shaved my hair. This is one of the most humiliating things in my country for the hair is the woman’s honor and a hairless woman is excluded from society.

On a different day they pulled my fingernail, more humiliation and more suffering, but during all that I only trusted God, I asked Him to give me comfort and faith, to fill my heart with the blessed hope, so I could endure such humiliation and such physical pain, I trusted God and He protected my life, I stood faithful to my God and Savior Jesus Christ.

My family paid a very expensive bail to release me. When I returned home, the police take my passport and stamp it, which means I can no longer study and work. The only solution my family saw is to leave the country, I ended up traveling by bus to a far away country. I didn’t know where to go, whom I will meet, but I know there is a Heavenly Father who takes care of me.

In that country, I had a very hard time I had no money, I asked help, no one wanted to help, then I remembered a pastor on the TV who lives there, I had his phone number, I called him and told him my story, he asked me to go to a special place. While living there, I met with some believers and we used to study the Bible together. The war broke there, so I needed to leave the country, I did not know where to go. God has open the way for me to travel outside the Middle East, I want to praise God, I got baptized that day I will never forget.

Now, I am a student, studying theology. I want to share the Good News with my people, so they will know my Lord and Savior Isa Al-Masih. To follow Isa Al-Masih is to participate in His sufferings. Yet, the blood He shed for me is worth infinitely more than anything I can do for Him today. And one day, when Jesus returns, my brother and I will get new bodies. 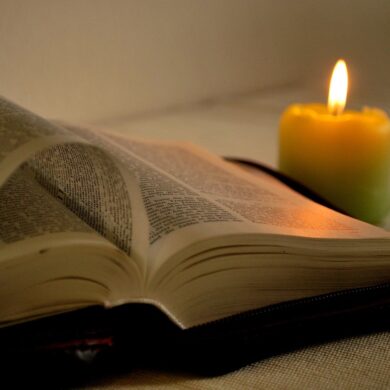